Our stay in Cancun has been surprising in many ways so far. I don't think either of us had really thought much about what we'd find here; we just knew that it's a popular spring break and vacation destination, especially for the eastern half of the US (west coasters tend to go to Cabo San Lucas instead), there are nice beaches and hotels, and it's in Mexico. Personally I'd pictured a Senor Frogs-dominated scene with sloppy, waterproof bars and hotels.

And while some of that does seem to exist, it's like 10% of the story here. What we've seen has been a lot nicer than the US cities that we grew up in, upscale without being gaudy or lamely tourist-driven. The hotels on the beach are modern and almost understated, e.g. the opposite of a Las Vegas in Mexico. And the town itself is just really... nice. 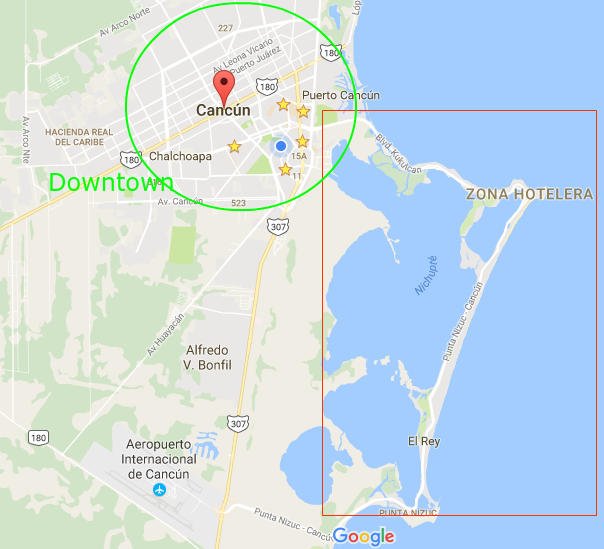 You can divide Cancun into two main parts: the Hotel Zone (Zona Hoteleria) and Downtown. The Zona Hoteleria (red box) is a long stretch of land in the shape of a 7, about 12 miles in length from the start to the end. So that's a bit too long to walk the entire thing or have access to all of the beaches in a single day.

Downtown is very roughly the green circle above, and is really just a nice Mexican city. Totally different feel, no beaches or fancy hotels. This is where we're staying, you can see approximately from the blue dot surrounded by stars (places we're planning to visit nearby).

To oversimplify, the hotel zone is where most tourists and probably every all-inclusive visitor heads to immediately and stays at for the duration of their trips. Downtown is where the locals and expats live, and where the city of Cancun exists in its own right.

Far to the south of town is the airport, and to the north just a bit, on the water, are Puerto Cancun and Puerto Juarez, from which ferries leave for Isla Mujeres, and I'm sure where cruise ships dock.

So far, we've spent nearly all of our time in downtown and have visited the hotel zone once for half a day. We had expected to spend more time in the hotel zone, it's tricky to do so on a budget when you're not staying at an all-inclusive or timeshare. Let me explain.


All of the beaches in Cancun are public by law. They are protected from the water to something like 20 meters back, so none of the hotels can build or claim rights to the beach for that 20 meters. However, after 20 meters, the hotels can and do own land, which means that much of the beach access is not public at all, even if the beach itself is.

We tried for over half an hour to walk through hotels to the beach, or to sit at a bar in a hotel and grab a drink before continuing through to the beach. It seems reasonable that if we spend some money there we should be able to walk through to the public beach right? We tried at three hotels and couldn't get past the lobbies, often not even that close. When we asked about the bar, we got looks like we had three heads and polite refusal. They didn't even want to take our money for the trivial privilege of walking through the lobby.

The reason for that turns out to be that these are mostly all-inclusive resorts or timeshares. Although I would consider doing one some day, I'm starting to hate the phrase because these are practically hostile to backpackers. All-inclusive means several reasons that we can't just walk through or buy a drink.


First, because it's all-inclusive, nobody there is paying for their drinks at the bar. I'm not even sure if you can pay for a single drink at the bar, we may find out later. Second, if you're on an all-inclusive, it means you get everything for free, so the staff needs to be able to tell who is included and who isn't. Seems like wristbands are one mechanism for this. We're not included and we don't have wristbands. Lastly, I think the inclusiveness extends to not wanting strangers who haven't bought into the program, and *gasp*, may not even be able to afford to, there. Even if that's not a major reason, we had no luck getting beach access through the resorts.

We ended up walking a mile or two to one of the several public beach access points in the zona: Playa Marlin. It was a hike and it's not exactly obvious if you don't know what you're looking for, but the results spoke for themselves.


We took some government provided beach chairs on Playa Marlin for a while to sit and enjoy the beach and surf before someone came by to tell us we had to rent the chairs from him, $200 MXN a day. Oh well, we got at least half an hour for free.

One interesting thing about the beaches in Cancun: the sand doesn't get hot. The sand here is white crushed coral, which because of its composition doesn't absorb heat from the sun in the same way, and release it back into your feet.

We stayed two nights at La Morena hostel in downtown, very close to Parque Las Palapas, a lively and central public space with street food and events and good neighborhoods surrounding it. La Morena was pretty nice (once the AC was fixed for night 2), although Spanish was by far the predominant language there, which is a little surprising for a hostel, and made it difficult for us to be social until we met the commonwealth travelers.

After landing and getting situated at La Morena, we found an Airbnb in town for about the same price (~20/night total), but a private room, owned by a New York couple, in a great part of town, with a pool, etc, etc, so we booked 7 nights there. It's been a great decision so far; the hostel was nice and certainly more social, but having a private room and being able to unpack things a bit is a game changer (plus: TV and near exclusive use of the wifi). Our hosts are expats who know a ton about the attractions in the Yucatan and how to get by here, which helps immensely.

Surprisingly, near the Airbnb there is a Walmart, a Sam's Club and a Costco, all about a 10 minute walk. We've been to the Walmart three times already (cheapest sunscreen around) and it's really cool to see something so familiar and so different.


It's nicer than most US Walmarts that I've been too, but the idea is the same. Bulk foods & goods, cheap foods & goods. Apparently the government sets or guarantees some of the prices here, such as water & tortillas, so that the average worker can afford them.

The average american could navigate this Walmart very well. It's laid out like you'd expect and there are many bi-lingual signs, but even ignoring that, a 3L bottle of orange juice is unmistakable. I loved the fresh, daily tortillas counter. You simply can't get this in the US and it's a small part of the reason why cooking Mexican in the states is simply not the same as visiting.

Tortillas are a labor of love, or at least just labor. If you've never had fresh corn tortillas, or never liked them, it's because it's just not something we do right in the US, despite the quality of the Mexican food. Fresh tortillas are like fresh, handmade pasta, but with a much shorter shelf life - they don't freeze well, and the quality difference between day 1 and day 2 is substantial. If you don't have some abuela making them daily, you're not getting why the basis of many Mexican dishes is the corn tortilla.

There's a popular taco shop in Chelsea Market in New York that would sell us same-day tortillas if we waited in the long, long line for them. Other than making them by hand with masa harina, that was our best option, and even that we only exercised once or twice for top notch home-cooked Mexican.

So it was amazing and expected and surprising when the Walmart here had a tortilla counter, selling (what I presume are) fresh, daily tortillas. Even more surprising was the price, 1 kg corn tortillas for $12 MXN, or a bit less than $0.70 for 2.2 lbs. Do you know how much tortillas weigh? That's a huge family meal's worth for less than 70 cents a day. We intend to try them and are just looking for the right inspiration that we can cook on a stovetop here.

Walmart aside (and it is a focus here), we found an amazing shop that is: liquors and wines (ok), butcher (what?), and specialty foods (really?) that I loved. Why is this combo non-existent in New York? I got what looks like a very nice bottle of tequila for $250 MXN, or about $12 USD. El Jimador, a nice mid-range brand that I like in the states? $7.50 for a bottle here.


Other than frequenting Walmart we've been trying to explore downtown Cancun on foot. We ended up at a local/ex-pat cafe recommended to us by our hosts. This is notable because they served (and I ordered) a Horchata Frappe. It was amazing.