Like I said in the last post, we got about 10 minutes into our trip when we noticed the aux button was not working.  Knowing that we would be driving through long stretches of the middle of nowhere, this was going to have to get fixed, but we'd manage for the first stretch.

Our first stop was the Dark Sky Preserve in Cherry Springs, Pennsylvania.  It's in north central PA, a couple of hours from South Williamsport, PA - also known as the home of the Little League World Series, which had ended two days before our arrival.  I love dark skies and tons of stars (one of my favorite memories from college was driving out to the dock at Y beach with Chris and Sus and watching a meteor shower in the middle of the night.  This was either junior or senior year, and Ash and Stace got too freaked out about going out there at 2am, so it was me and a couple - thankfully I don't remember being too much of a third wheel), and this was a place we'd been wanting to check out for a couple of years.  So, at 10:00am, we were packed up and headed out from NJ.  It was an uneventful drive though a whole lot of nothing (anyone who has driven through PA knows that it is an incredibly boring state to drive through with tons of trucks), but we made it to the campsite by 4:00pm or so.  We had bought a tent a few years ago but had never actually used it, so we were giving ourselves a lot of time to set it up just in case - turns out it is SUPER easy to set up.  Adam played around with making a fire (successful!), we went on a quick hike around, had some dinner (sandwiches, nothing we had to cook), and waited for the dark skies and stars...except it was incredibly cloudy and we saw nothing.  While that sucked, at least my first camping experience (aside from Acatenango) was a success.  We woke up with the sun the next morning, and we were on the road by 6:45am for a looooonnnnnng day of driving to Chicago.

The drive, for the most part, was pretty uneventful.  The worst part was stopping for gas at this Exxon station in the middle of nowhere, New York.  I had a headache, so I asked Adam to get me a Coca Cola.  Not complicated, right?  While he goes inside, I start filling the tank, and it is the slowest gas pump I've ever used.  A guy pulls up on the other side, starts filling, and asks if mine is painfully slow as well.  I tell him yes, and then he tells me that this happens every once in awhile.  So while I stand there pumping gas for over 20 minutes (and of course there's no notch to leave it, I have to hold it the whole time), Adam comes out and says they don't have Coke, and no small bottles or cans.  He gets me a tallboy size Cherry Coke, which I drink about 1/4 of.  And back to the gas, it doesn't stop itself, it pours out onto me a bit, signifying that it's done.  Thanks.

One of the things we decided before we left is that in order to count a state as visited, we needed more than a stop for gas - we needed to have a meal at preferably a non-chain restaurant or to have the "state food."  So for Ohio, that meant Skyline Chili.  While yes, technically a chain, it's what Ohio is famous for.  For those who don't know, Skyline Chili is chili with a bit of cinnamon and served over spaghetti.  It looks kind of like vomit, but thankfully tasted a bit better than that.  After a Starbucks, I took over driving and we headed out on the open road.


Ohio and Indiana were incredibly open and flat states, and driving was a piece of cake.  We wanted to do something in Indiana, so Adam looked up the state food (Sugar Cream Pie) and then proceeded to call a billion places to see if they had it, to no avail.  When we stopped for gas, we saw signs for a farmers market and drove around to find it.  Although they didn't have Sugar Cream Pie, I decided our efforts were strong enough that Indiana needed to count.

We got to Susan J and Conrad's house in Glen View (when I was in college, there were two Susans in our group of friends.  For some reason, Susan J stuck more than Susan P, so even though she's technically Susan N now, I still call her Susan J.  Both Susans are still two of my favorite people in the world, and I typically refer to them as Susan J and Sus) around 6pm, got settled, and then headed to dinner.  Adam wanted dish deep pizza while in Chicago, so we headed to Giordano's to cross that off the list immediately.


We wanted to spend at least one day downtown, so the next morning we took an Uber into the city, had lunch at Topolobampo, and explored.  Adam has never really spent time in Chicago as an adult, so it was fun for him.  We went to Millennium Park, saw the Bean, walked around the city, and had drinks at the Hancock Tower for the amazing view.  While it was sunny, there was a haze over the city so we couldn't see as far as we'd like - we found out later it was from wildfires in MONTANA!  We met up with Susan J and Conrad for drinks at The Aviary, a Grant Achatz cocktail bar that Adam wanted to go to, and then dinner at Roister, also a Grant Achatz restaurant, but a more casual - and cheaper - one than, say, Alinea. 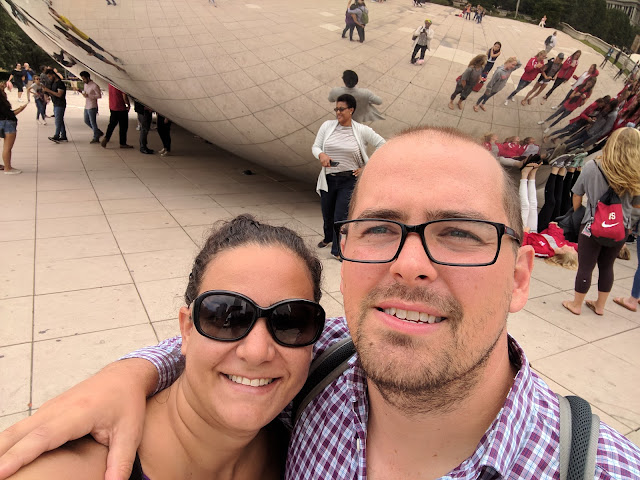 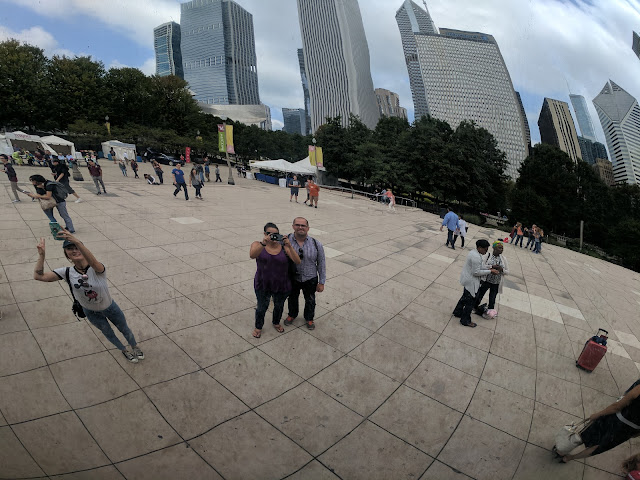 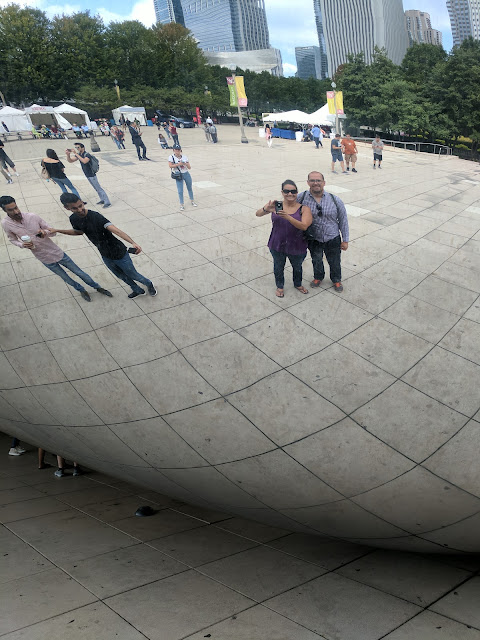 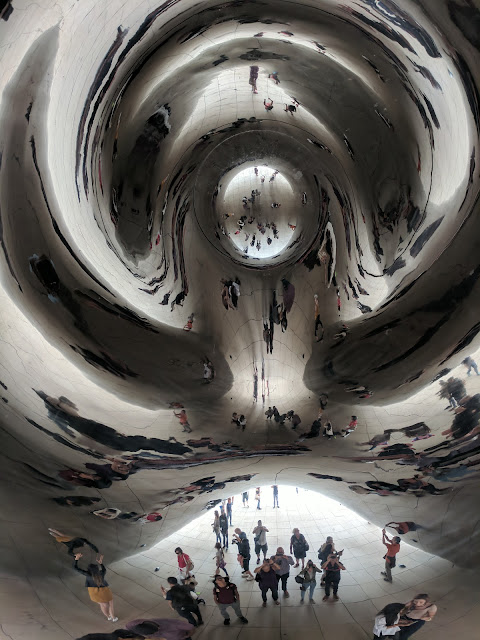 We were lazy on Friday, and it was great!  I didn't really want to deal with Labor Day weekend traffic, so we stayed local, having Chicago hot dogs and Italian Beef sandwiches from Portillos, going to see the Home Alone house (they were doing construction on it, so we didn't get the best view), and staying in and grilling steaks for dinner (thanks, Conrad!).